Amazon’s current market cap of US$1.7 trillion is higher than the 2020 GDP of South Korea or Canada

The world is used to breathtaking news about U.S. tech giant Amazon. When Amazon founder and one of the richest men in the world, Jeff Bezos, boarded his spacecraft a few weeks ago, he took the first ever paying passenger to space on a rocket which was entirely built and operated by a private company – Jeff Bezos’ Blue Origin. With Blue Origin, Bezos has taken the idea of private space traveling to a new development level, investing heavily in the aim of making space travel possible for wealthy private individuals in a near future. Blue Origin may be a very revolutionary, but surely not the only highly lucrative invention in Jeff Bezos’ career. His first hit Amazon has become a success beyond compare – one of the best-performing and most valuable companies in the world. Including all company segments, Amazon, Inc. registered a record year-on-year net sales growth of 44% in Q4 2020, reaching a total of US$125.6 billion. In the U.S. eCommerce market, Amazon is not only by far the biggest first-party online retailer, it generated more than three times as high a net sales amount as second-placed Walmart. Amazon has in fact become so powerful that its worth exceeds the entire economic performance of several strong economies: 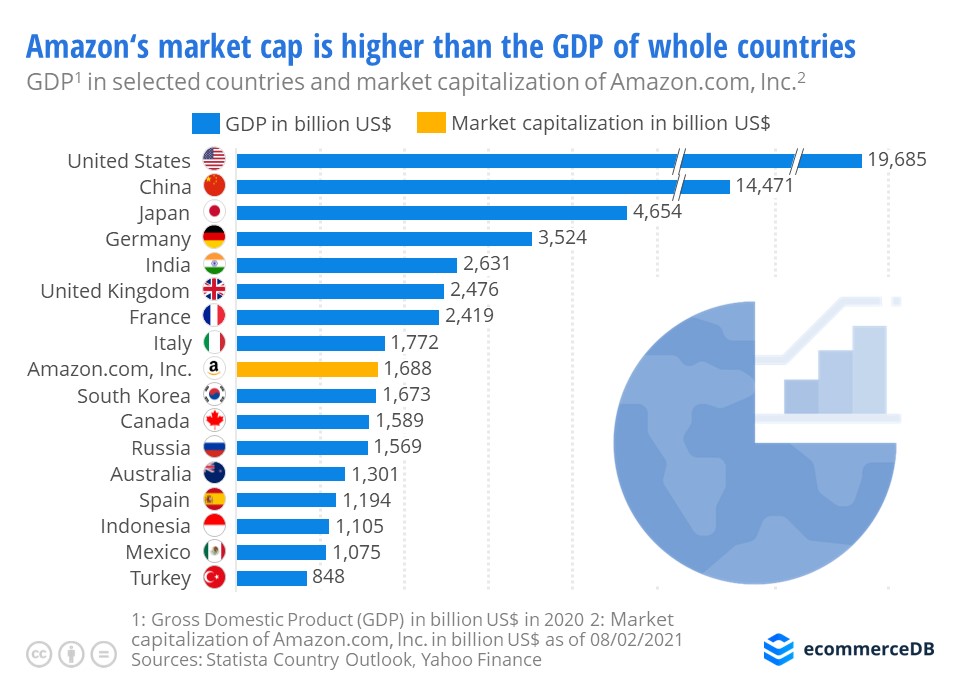 As of August 2021, Yahoo Finance indicates Amazon, Inc.’s market capitalization to amount to around US$ 1.7 trillion. A comparison to selected economies’ GDP figures illustrates the significance of this number and thus, Amazon’s economic power: Strong global economies like Italy, South Korea, Canada, and Russia reached 2020 GDP numbers which are comparable to Amazon’s current market cap. The United Kingdom and France, which are by the way among the top 10 eCommerce markets in the world according to the Statista Digital Market Outlook, reach GDP figures which are not a lot higher than Amazon’s market cap, namely US$2.5 and US$2.4 trillion, respectively. Only globally leading economies’ GDP – like the U.S. or China – is many times higher than Amazon’s current market cap. Countries like Turkey, Mexico, Spain or Indonesia are quite far off when comparing their GDP to Amazon’s market capitalization. With US$848 billion, Turkey’s 2020 GDP was about half Amazon’s current market cap.

You need more details and want to dive deeper into the world of Amazon? Check out ecommerceDB.com’s Company Report on Amazon, Inc., and get all the information you need on company financials, net sales streams, online store analyses and many other relevant KPIs of Amazon, Inc.