Wish is the most valuable eCommerce unicorn

The U.S. online shopping website and app provider Wish is currently valued at US$11.2 billion

In 2013, Californian venture capitalist Aileen Lee coined the term “unicorn” for a privately owned start-up company valued at over US$1 billion. When Lee introduced the term, start-ups with such a high valuation were as hard to find as mythical creatures – the reason why she chose the term to describe the 39 companies that met the criteria at the time. The number of unicorns has grown faster each year since then – according to CBInsights, there are currently 475 of them out there in the business world. Their total cumulative valuation is around US$1,418 billion. Some of the most famous current and former unicorns include FinTechs like Chinese Ant Financial or U.S. Stripe, mobility revolutionaries like Uber or DiDi Chuxing, and home-sharing giant Airbnb. The majority of the billion-dollar start-ups come from the U.S. and China, but countries like Korea, India or Indonesia have also spawned several promising business models that have made it into the unicorn world.

CBInsight’s current list of international unicorn startups also features several players from the eCommerce field. These are the top five, ranked by valuation: 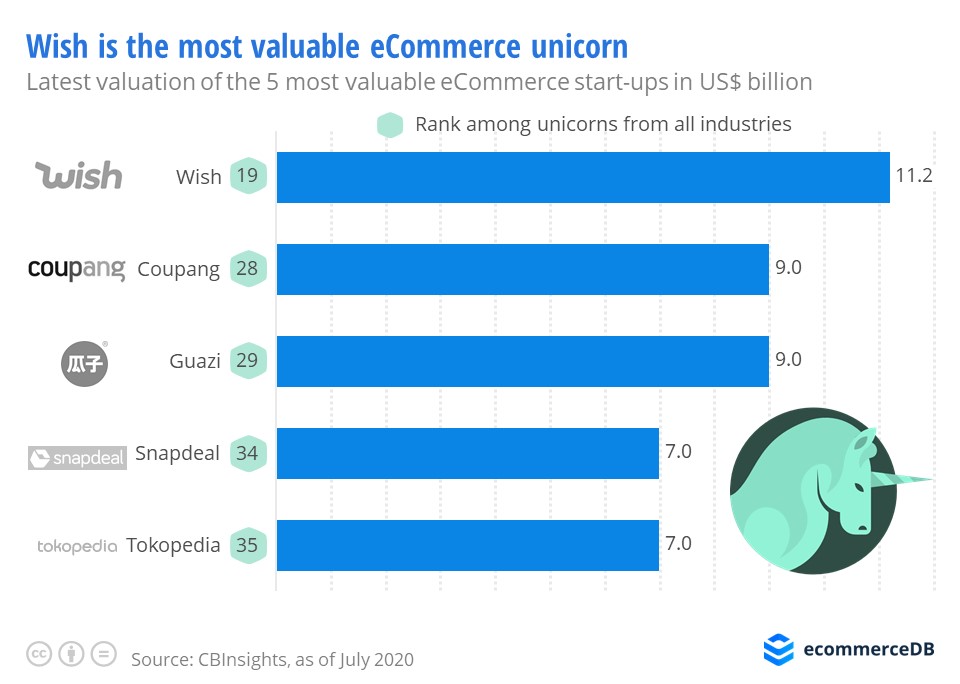 The most valuable unicorn from the field of eCommerce is U.S. start-up Wish. The marketplace, which is most famous for its online shopping app, reached the unicorn status in 2015 and is currently valued at US$11.2 billion. This makes Wish the only eCommerce start-up which is a so-called “decacorn” – worth more than US$10 billion. In the list of the most highly valued unicorns, Wish is in 19th place. The second and third biggest eCommerce unicorns come in 28th and 29th in the Global Unicorn Club of CBInsights: South Korean online marketplace Coupang – worth US$9 billion – and Chinese Guazi (also valued at US$9 billion) – a C2C used car platform. The fourth biggest eCommerce unicorn is the Indian online marketplace Snapdeal, with a valuation of US$7 billion, followed by Indonesian C2C online store Tokopedia, also valued at US$7 billion.

Note: ecommerceDB.com only covers B2C online stores generating first-party net sales. Since neither C2C business models nor marketplaces are in-scope, ecommerceDB.com does not cover the top 5 eCommerce unicorns in its rankings.