It has become something like a tradition: eCommerceDB’s cooperation with EHI Retail Institute in a yearly analysis of the German eCommerce market. For the 14th year in a row, eCommerceDB and EHI Retail Institute have identified the leading first-party B2C online stores and hybrid marketplaces in Germany. The results of the in-depth KPI analysis have been published in this year’s edition of the joint eCommerceDB and EHI study “E-Commerce Markt Deutschland 2022” (eCommerce Market Germany 2022). In addition to the well-established first party ranking – and after the great success in 2021 – the current edition again includes a marketplace section, based on a detailed analysis of the 10 biggest online marketplace players by total GMV. “E-Commerce Markt Deutschland 2022” by eCommerceDB and EHI Retail Institute is the perfect starting point for your market research, strategy planning, or competitive analysis. Catch a glimpse of the brand-new study results: 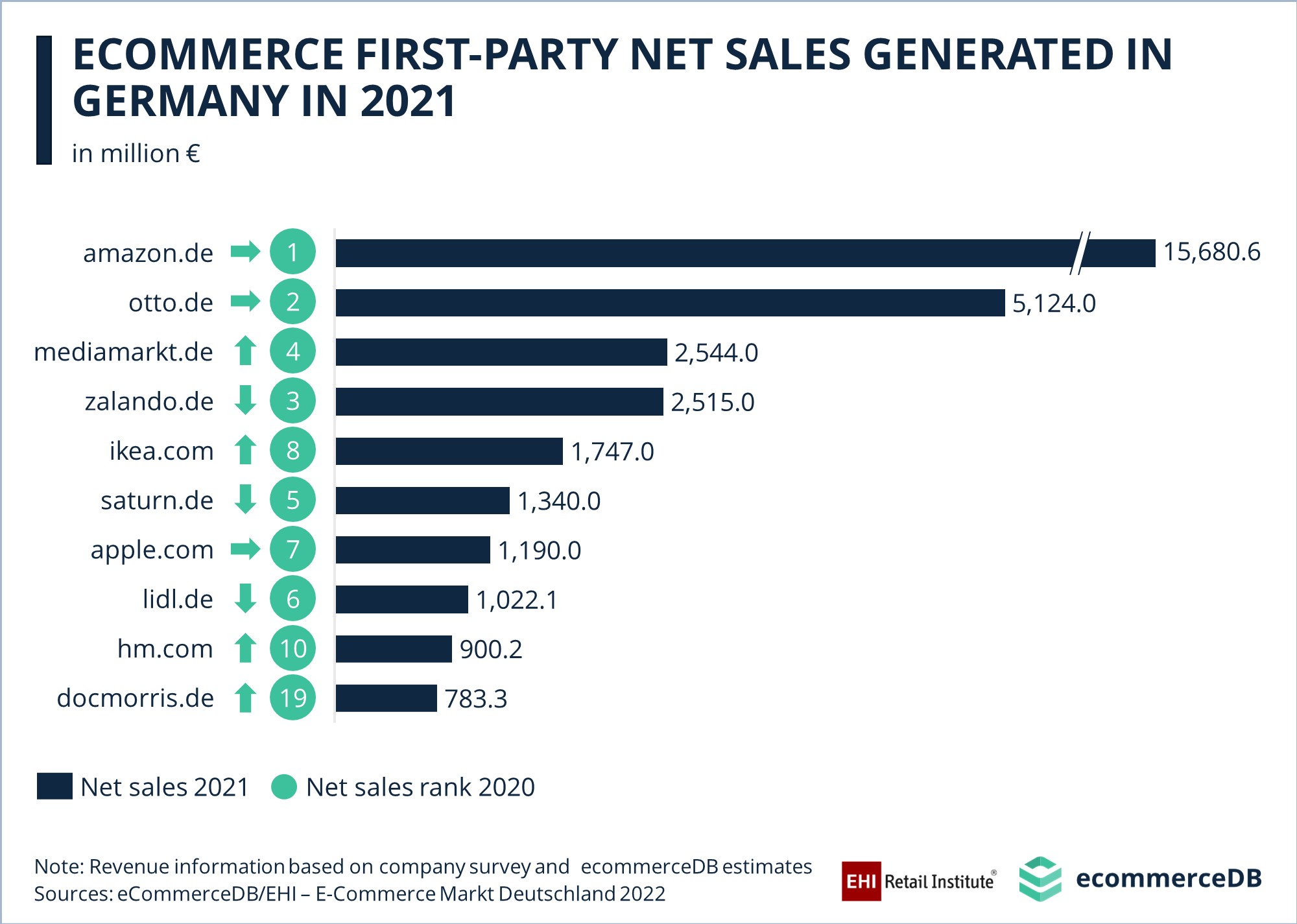 The 2021 ranking has many old faces in the top ranks – and the first two have defended their lead. According to the results of “E-Commerce Markt Deutschland 2022”, amazon.de and otto.de are Germany’s biggest first-party online retailers. amazon.de leads with a familiarly big margin: The all-round player generated 2021 first-party net sales of €15.7 billion in Germany, which is about three times as much as second-placed otto.de’s total net sales of €5.1 billion. Ranks 3 and 4 have seen a change: mediamarkt.de and zalando.de swapped places compared to last-year’s ranking, with mediamarkt.de now occupying 3rd rank. ikea.com was able to climb several steps further towards the top: the Swedish store generated €1.7 billion in Germany in 2021, which helped it secure 5th rank this year. Last year, ikea.com was in rank 8. ikea.com was not the ultimate frontrunner in terms of climbing up the ranking, though. The current top 10 have a newcomer which ranks 9 ranks higher than after last year’s analysis. docmorris.de generated 2021 first-party net sales of €783 million, which secured it rank 10 of the biggest online stores in Germany by total net sales. As an online pharmacy, docmorris.de is still profiting from a pronounced corona effect, which is one of the possible reasons for the online store’s success in the past year. Moreover, Docmorris mother Zur Rose acquired several competitors over the past few years, some of which – for example vitalsana.com – redirect to docmorris.de in Germany. This helped the online store increase its total net sales by more than 60% between 2020 and 2021, according to eCommerceDB data. notebooksbilliger.de, which was in rank 9 in the 2020 ranking, is no longer among the top 10. It dropped to rank 13 in 2021.

Check out the complete study “E-Commerce Markt Deutschland 2022” to dive deeper into the topic!