Alibaba’s Singles’ Day, the unofficial Chinese holiday and biggest worldwide shopping frenzy, broke another record this year. Although the 2020 GMV explosion of almost +100% could not be repeated, Singles’ Day was still able to raise the GMV bar by 14% this year, reaching a total 2021 GMV of US$84.5 billion. An increase in GMV was hardly surprising, as Singles’ Day promotions were extended for the second time this year to a total of eleven days. The U.S. counterpart to Alibaba’s Singles’ Day, the weekend from Thanksgiving Thursday through Cyber Monday, was eagerly awaited by U.S. consumers this year. According to the Statista Global Consumer Survey, the great majority of Americans planned to hunt for deals during the shopping event. Only 19% of respondents said that they were definitely going to avoid purchases during Cyber Week. The chances were good, thus, that Thanksgiving Thursday, Black Friday, and Cyber Monday were going to break another GMV record. The final results then came as a surprise: 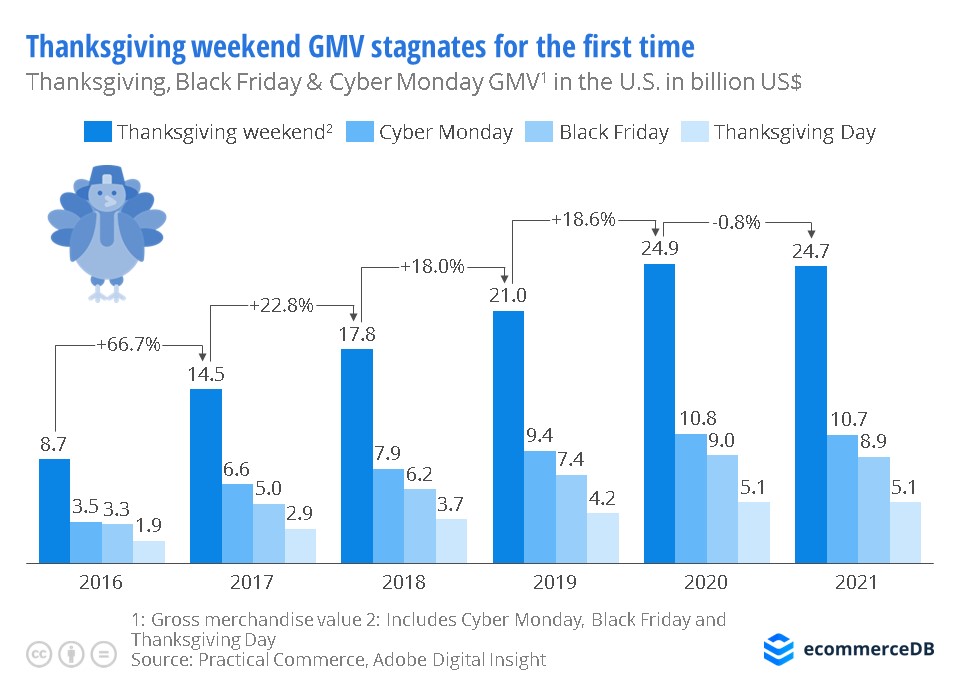 For the first time since its invention, GMV numbers during Thanksgiving weekend did not rise this year. The three days taken together registered a decline of -0.8% in GMV compared to 2020, resulting in a 2021 GMV total of US$24.7 billion, while 2020 had seen US$24.9 billion. GMV on Thanksgiving Day remained stable between 2020 and 2021, while Cyber Monday and Black Friday GMV went down slightly. When taking a look at the general GMV development over the past years, a trend towards a slow-down in year-on-year GMV growth during the shopping event had already become manifest since 2016. According to Adobe Analytics, this is not necessarily a bad sign, though. In combination with other analyses, it rather indicates a shift of spending away from the weekend around Thanksgiving towards a larger time frame. Online consumer spending in the whole month of November (1 to 29), for example, was up 12% compared to 2020, according to Adobe. For the whole season November 1 to December 31, Adobe expects a year-on-year increase in online spending of 10%, which would result in a new record. When comparing only the two shopping events Thanksgiving weekend and Singles’ Day, though, Alibaba’s deals battle was able to expand the lead once more. Still, the results of the two events are not 100% comparable as Thanksgiving weekend includes only three days while Singles’ Day lasted for a total of eleven days this year.

Do you want to compare Thanksgiving weekend to other international shopping days like Amazon Prime Day, El Buen Fin, and more? Check out the ecommerceDB report “In-depth: eCommerce Shopping Days 2021” – an update with the latest data is already on its way!