The Chinese eCommerce market is in many respects unique. It is not only the biggest eCommerce market in the world by a huge margin – with a total revenue of more than US$1.3 trillion in 2020 according to the Statista Digital Market Outlook, it is almost 2.5 times as big as the U.S. eCommerce market – Chinese eCommerce also has a rather distinctive clientele. Compared to U.S. online shoppers, for example, Chinese eCommerce clients are fairly young – 73% are 44 years or younger (62% in the U.S.)  When it comes to the adoption of online payment services, for example, hardly a country in the world beats China, according to the Statista Global Consumer Survey – with an incredible 82% of the Chinese online population having used online payment services at least once in 2020. An even closer look at the profiles of online shoppers in China reveals more interesting characteristics. The majority of eCommerce clients in China are male. According to the Statista Global Consumer Survey, 53% of online shoppers in China in 2020 were men. When it comes to the online shopping frequency, however, a gender comparison of Chinese online shoppers opens up a different picture: 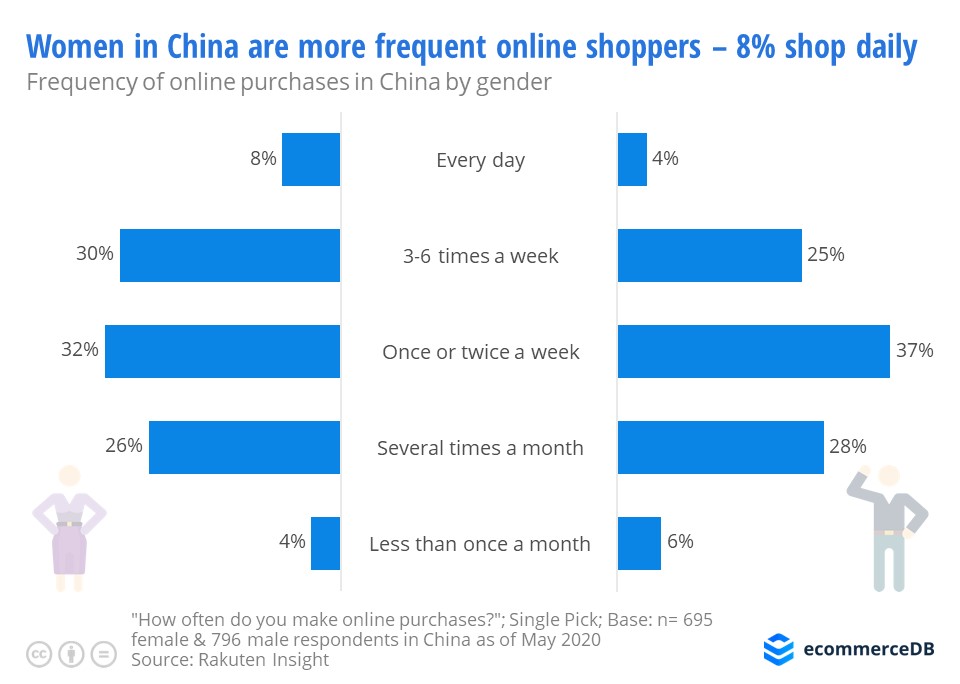 Women in China tend to shop online more frequently than men. In a survey carried out by Rakuten Insights in May 2020, 8% of female respondents stated that they made online purchases on a daily basis. 30% shop online three to six times a week and another 32% make purchases from online stores once or twice every week. This makes a total of 70% of Chinese women who shop online at least on a weekly basis. Although the percentage among men is lower, a great deal of men are still very frequent online shoppers – with a percentage of 66%, two in three men in China also shop online at least once a week. Once or twice a week is in fact the online shopping frequency that the greatest share of men indicated. A total of 37% of male respondents chose the answer. 34% of men in China make online purchases several times a month or less, compared to only 30% of women. When it comes to the reasons why Chinese consumers shop online, the differences between men and women are less pronounced. Both men and women in China value cheaper prices or the possibility to have products directly delivered home when they were bought online. For 60% of women and 51% of men in China, eCommerce is in general a more convenient way of shopping.