inet.se, operated by Inet AB, is an online store with nationally-focused sales. Its eCommerce net sales are generated almost entirely in Sweden. With regards to the product range, inet.se specializes in the “Electronics & Media” category, particularly in the area of “Consumer Electronics”. The online store was launched in 2000. 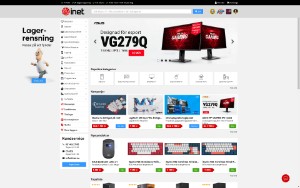